The Volcano Eruption Extreme slot online is a 5-reel, 25-pay line slot powered by NextGen Gaming. The Eruption feature, where you get five free re-spins with a wild reel locked in place, is the main attraction of this updated version of the well-known Volcano Eruption slot that was published a few years ago. It may be played on all platforms for from 25p and £62.50 each spin.

The Volcano Eruption Extreme online slot resembles the original Volcano Eruption in many ways, but it is a much more contemporary version of the game. The thundering soundtrack is the first thing you'll notice. It gets louder as the gameplay picks up speed and when you achieve consecutive wins.

You are transported to a group of tropical islands in the South Pacific where a rumbling volcano sits along the dangerous Ring of Fire. The A, K, Q, J, 10, and 9 playing cards, as well as Kumquat (fruit) bunches, spider monkeys, parrots, and tegu lizards are among the symbols on the reels. The latter is the most lucrative symbol; five of these on a payline will award you 20 times your wager.

The wild sign, an erupting volcano, only appears on the middle three reels (reels 2, 3, and 4), but more crucially, it can replace any other symbol. The Eruption feature is activated when three simultaneous erupting volcano wilds appear on the reels - but more on all this later in our Volcasino Eruption Extreme slot review.

The Volcano Eruption Extreme slot has a theoretical return to player of 95.41%, which is a little below the current market average. Played at medium volatility, this game should be accessible to players of most skill levels.

How To Play Volcano Eruption Extreme

To play the Volcano Eruption Extreme slot, load the game at Spin Genie. If you have already played a NextGen Gaming game, you will recognise the scene. You'll see that there are coins with a plus and minus symbol on the buttons directly above and below the play button. The buttons for increasing and decreasing the stake are shown here. To increase or decrease your stake, click these. Along with the total bet indicator, your balance may be found at the bottom left of the screen. Set your bet when you're ready, then click "play" to start the reels spinning. 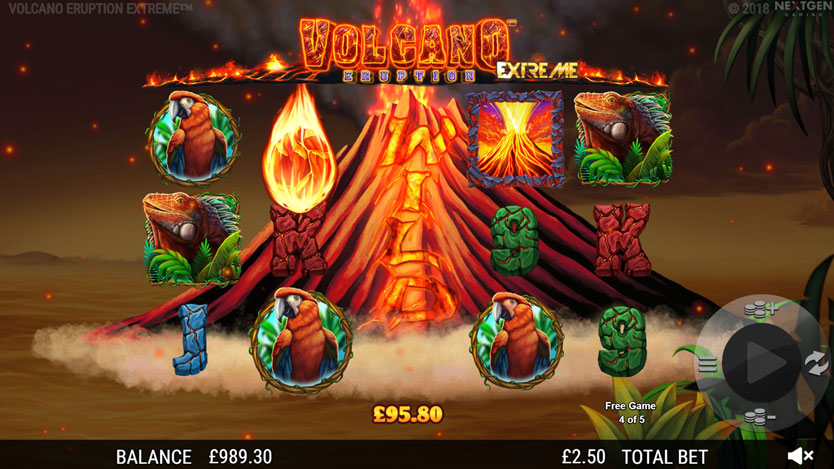 The Volcano Eruption Extreme slot bonuses are as follows:

The volcano serves as the wild symbol and can be used in place of any other symbol to produce a win. It only shows up on reels 2, 3, and 4, and it can replace all other symbols. Additionally, it starts the extra spins.

At any time, the volcano could erupt, causing more wild symbols to appear on the screen.

Three volcanoes' wild scatters on the screen will start the Eruption Free Spin Feature, which awards five free spins during which the entire centre reel turns wild. The eruptions of the volcano happen more regularly.