Oh no! This isn’t Valhalla! That’s exactly what our band of hapless Vikings is exclaiming in our Vikings go to Hell slot machine review. The Vikings series of games is one of the most well-known releases from developer Yggdrasil and this time our Vikings may be on their most hazardous adventure yet! Keep on reading our Vikings Go to Hell online slot review to find out how you can help the Vikings find their way to Valhalla.

The fearless Vikings are back for their largest battle yet, taking on the underworld's burning demon hordes! The iconic Vikings series' third instalment builds on the previous games to bring even more excitement to the reels! The Vikings Go To Hell slot UK is an epic 25-pay line online slot that provides a thrilling gaming experience to gamers. With a wide range of creative extra features, you'll have plenty of opportunities to win a massive reward worth 150 times your entire bet. This game is playable on both mobile (via the Vikings Go to Hell Mobile slot) and desktop devices.

Vikings Go to Hell slot machine has a Norse mythology theme, but the location is hell – there are red-hot flames in the background, and icons on the reels include four weapon symbols and four viking symbols. There's also a wild symbol that can take the place of any symbol except the scatter.

If you’re brave enough to travel to hell then you’ll find that the Vikings go to Hell online slot has a generous above average RTP of 96.1%. To be honest, hell isn’t all that bad in the Vikings go to Hell slot online, as this slot only has a medium volatility rating making it accessible to all players; well, I guess if we can all go to hell, we might as well be able to play a game about it.

How To Play Vikings Go to Hell 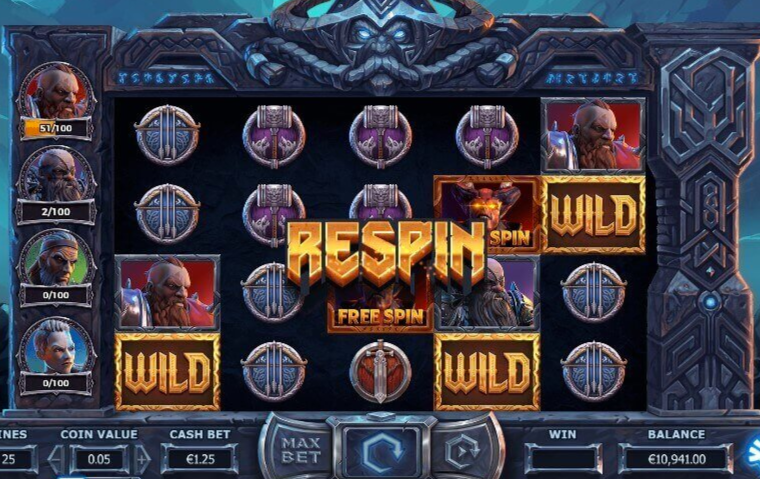 To play the Vikings Go to Hell slot load the game at SpinGenie. With a minimum bet of $0.10 per spin, the game can be played on any device, making it accessible for even players with very small budgets. To get started with the Vikings go to Hell slot machine, set your wager by using the + and - buttons. Once you’ve picked the right wager per spin for you and have made a note of how much you’d like to spend during the session, it’s time to spin the reels. You only need three or more matching symbols on the same pay line to hit winning combos while playing Vikings Go To Hell. 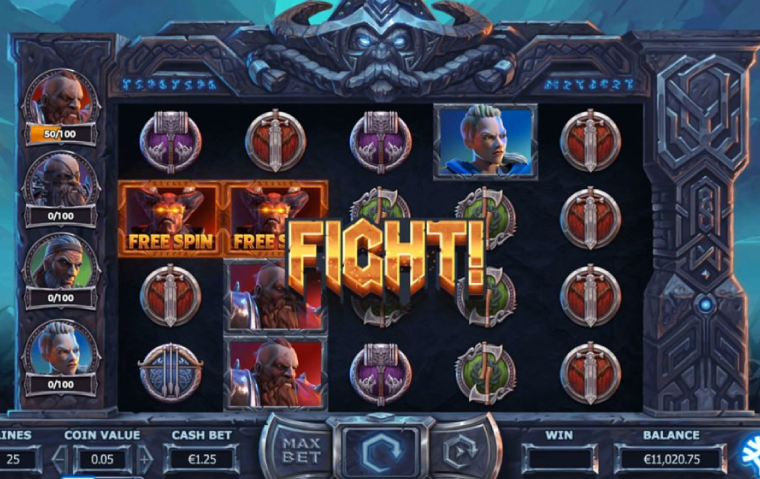 If you like your games with a lot of slot bonuses, then you’re going to enjoy what the Vikings Go to Hell casino slot has in store for you…

To help you create a win, the 'wild' symbol will substitute for any other symbol on any of the 25 paylines.

A free re-spin is triggered when two scatter demon symbols appear. Except that before that happens, each high-paying Viking symbol on the screen will fight demons, and if any of them wins, they will change into wilds.

Throughout the Vikings go to Hell slot, you can earn rage points for each of the four characters. Collect 100 rage points on one Viking and you'll get 7 free spins, with that symbol turning into a sticky wild whenever it appears. Every new player is given one Viking with 50 rage points.

You earn fury points by doing the following:

You can get a treasure chest on reel 5 that contains various prizes.

In the base game, you can win:

During the free spins, you'll win:

You can also launch this function by gathering all the anger in one or more Vikings, or by receiving them through the treasure chest.

The Lord of Chains (Level 1)

The Vikings will now fight demons every time they appear on screen, and if they win, they will turn into sticky wilds for the remainder of the Vikings Go to Hell bonus games. To fight the Lord of Chains, one Viking will be chosen. All Vikings will win all of their fights during the round (more sticky wilds) if they win three times in any of the bonus games, and you'll gain two more random wilds. You’ll then move on to level 2.

The bonus games will reset to 7 free spins once you've conquered and played all of your Lord of Chains free spins. The Vikings fight demons, sometimes go berserk, and one of them will face Lucifir at the end of each spin. You'll gain two extra sticky wilds on screen each time you vanquish him. If you defeat him three times, you'll receive a 3x multiplier on all subsequent free spins, during which all of the Vikings will constantly turn.

Play the Vikings Go to Hell Slot on SpinGenie

If you’ve enjoyed our Vikings go to Hell slot review then play the game for yourself at SpinGenie. Sign up and play today.