Rabbit in the Hat Slot Review

Can you pull a big prize out of the hat? Take a spin on Rabbit in the Hat to find out! This is a wonderfully designed game with free spins, Wild reels, and plenty of cash prizes to discover.

Welcome to SpinGenie’s blog, where we delve into the details of our most popular games. Rabbit in the Hat is one of the cult classics, and we’ll take a look at its gameplay, prizes, RTP, and more in our Rabbit in the Hat slot review!

Rabbit in the Hat Slot Overview

The Rabbit in the Hat casino slot is a magic-themed game with five reels, three rows, and nine fixed paylines. The visuals are colourful and fun: the game grid is positioned on a stage, under multiple spotlights, while a cartoonish animated magician stands next to the reels at all times.

Magic Hats and the rabbit come into play throughout, which can bring you bigger payouts, Wild reels, and free spins!

The Magician is the top-paying symbol, which awards up to 5,000 coins (when playing at maximum stake). This is followed by the glamorous Magician’s Assistant, which also pays up to 4,5000 coins for between two and five on a payline.

Other high- and medium-paying symbols include the Rabbit, Chest, Target Board, and Water Tank. Low-paying symbols are the Ace, King, Queen, Jack, 10, and 9.

Wilds and various Magic Hats may also appear on the reels, and can bring you bonus wins or free spins. Keep reading our Rabbit in the Hat online slot review to find out more!

How To Play Rabbit in the Hat 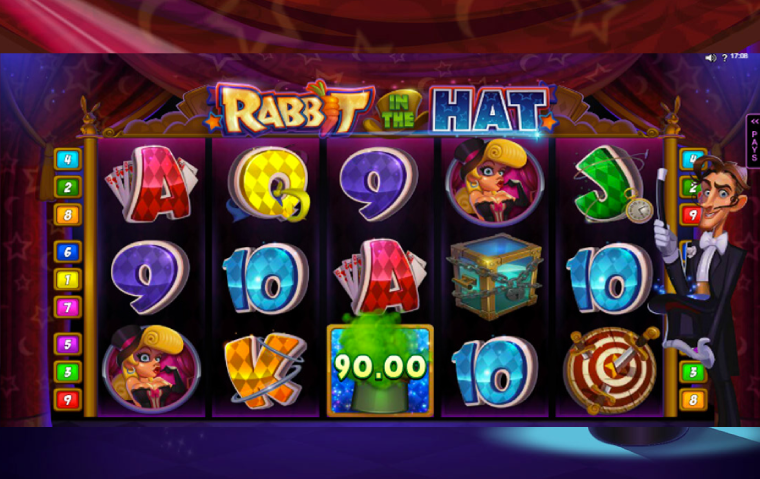 It’s easy to play Rabbit in the Hat slot on any device, thanks to its simple controls. Take a moment to set up your stake before you start playing: use the ‘-’ or ‘+’ buttons to easily decrease or increase your bet.

When you’ve set your bet, tap the ‘spin’ button below the game grid to spin the reels. If you can create a winning combination, Rabbit in the Hat will award a prize shown on the paytable!

Want to browse the paytable and rules? Just tap the hamburger/menu button to open the game options menu, then click ‘paytable’. 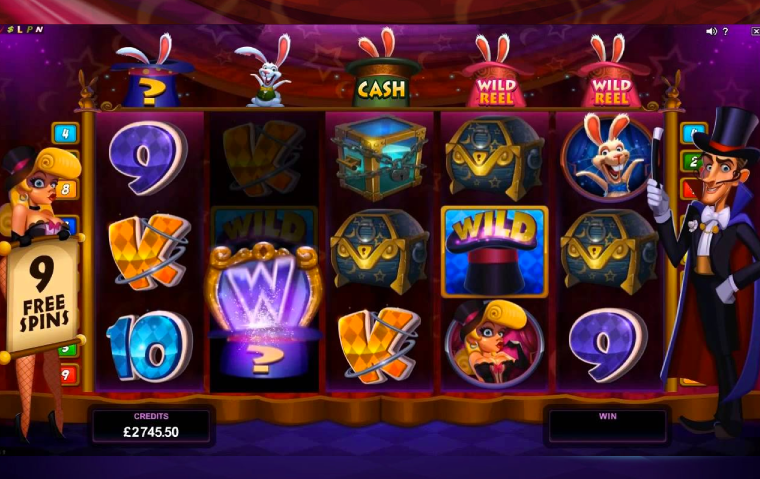 The Wild symbol substitutes for all other symbols and pays up to 25,000 coins (when playing at the maximum stake).

When a Wild symbol appears beneath a Magic Hat, you’ll win the Magic Hat’s prize! You can win multiple prizes per spin, and all Magic Hats will jump one reel to the left on each spin. But a Magic Hat will disappear if it gets to the leftmost reel without its prize being awarded.

This Rabbit in the Hat slot bonus feature starts with a Magic Hat positioned over each reel, and a random Magic Hat will appear above the fifth reel on each spin.

The Magician puts on his hat and his Assistant joins him on the other side of the reels for the duration of the feature. As a result, the Free Spins feature has a different look and feel from the base game.

Plus, you can retrigger the Free Spins feature and win 10 more free spins!

Rabbit in the Hat Slot on SpinGenie

Rabbit in the Hat is a stylish slot with a fun theme, exciting symbols, and great bonus features offering some big cash prizes. Try it for yourself — just sign in and play Rabbit in the Hat at SpinGenie today!