Monopoly Big Money Reel has a luxurious look and feel, with stacks of Monopoly money and gold coins surrounding the reels. And the symbols on the game grid continue the opulent style, too, from the massive yacht set against a perfect sunset to the elegant, high-end car.

Mr Monopoly is a fixture during the game, appearing on the top-paying symbol and in animated form during the Monopoly Big Money Reel bonus feature! All of the symbols and background details look fantastic, with plenty of detail. The music is laid-back, cool, and classy, too. 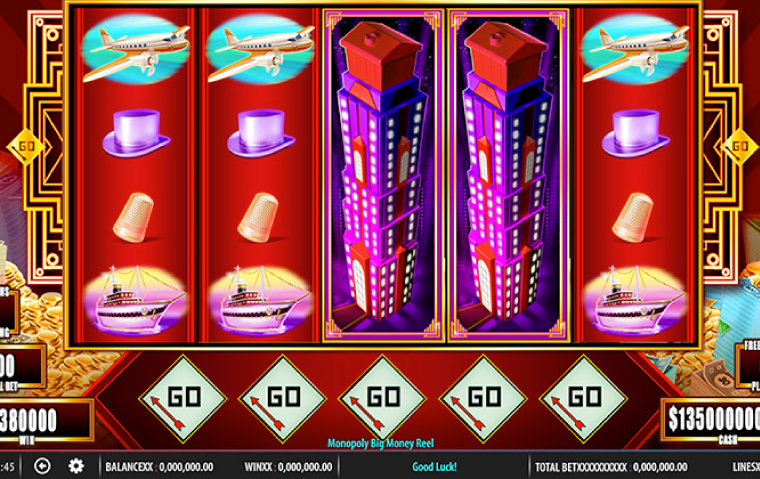 Press the ‘spin’ button to get started. The symbols will spin briefly then stop to reveal a set of random symbols, some of which may appear fully or partially. Land three or more matching ones to win a prize and maybe even trigger a bonus feature!

The top-paying symbol in Monopoly Big Money Reel  is Mr Monopoly, the franchise’s dapper mascot. Match three or more to win up to six coins. The purple-and-red Hotel symbol awards up to five coins, while the Green House (which takes the form of a dog kennel) offers up to four coins.

The Plane, Yacht, and Car award up to three coins each. Land a Top Hat or Wheelbarrow to scoop up to two coins. You can win up to 1.60 coins when you match the Boot or Thimble, too.

Use the ‘+’ and ‘-’ buttons next to the ‘bet’ display to set up your stake. Press the ‘?’ icon to open the paytable and browse the rules.

Extra Note 20, Note 50, Note 100, Note 200, or Note 500 symbols may appear on the reels during any paid spin. When this happens, all Notes will transform into one matching Note symbol (e.g. all Note 200s). You can win up to 50x your bet during the Mystery Bills feature.

Match five or more Note symbols scattered anywhere on the reels to trigger the Monopoly Big Money Reel Spin Bonus. You can activate the Utility Bonus or Go Free Spins Bonus during this round.

Tap the ‘spin reel’ button to spin the Monopoly Big Money Reel. If the reel stops on the ‘Utility Bonus’, you’ll get to play this feature.

Take a hand offered by Mr Monopoly to find a ‘spin’, ‘collect’, or ‘collect x2’.

You’re guaranteed to win an award of at least 5x your bet during this feature.

You can also win extra free spins and up to 50x your bet if you land Go Extra Spin Scatter symbols on any free spin.