We’re talking about ancient magic in today’s Merlins Magic Respins online slot review. Without addressing Merlin, a mythological character best known as an enchanter or magician, it is impossible to discuss the legend of King Arthur. The primary character of the video slot game Merlin's Magic Respins is the great Merlin, who has the ability to act as a substitute, turn symbols Wild, or remain on the reels. Players get more chances to win big thanks to bonus games and wild respin features included in the Merlins Magic Respins slot UK. If this sounds enchanting to you, keep on reading our Merlins Magic Respins slot machine review to find out more. 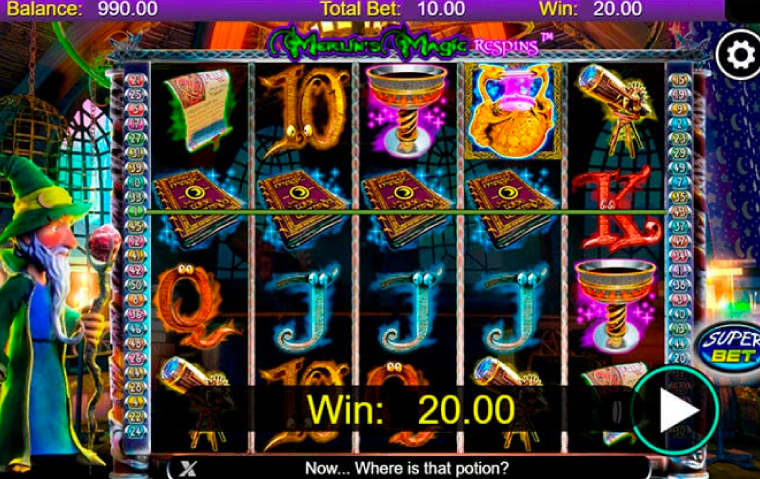 The Merlin's Magic Respins slot online, in contrast to the majority of slot games now on the market, has five reels and four rows, arranged in a 5x4 arrangement. There are 50 paylines that are active at all times.

Merlin, the star of the show, is the game's wild and can be found on reels 2-4 of the base game. During the re-spins feature, wild symbols may emerge on any reel. Additionally, when five of a kind appear on your current win line, Merlin offers the greatest prize of 1000 times your wager. In this game, the golden cauldron is a scatter symbol that awards scatter payouts as well as free spins, proving that cauldrons are not just for witches. The telescope and scroll both have top prizes of 200x your wager, and the challis has a top prize of 500x. The book of spells has a 300x multiplier. The card values are low-value symbols that pay out between 50 and 100 times your investment.

The Merlins Magic Respins slot online has a slightly disappointing RTP of  95.32%. This is redeemed by a medium volatility rating, however, which does make the game accessible to most players.

How To Play Merlins Magic Respins

The Merlin's Magic Respins video slot game measures 5 reels across and 4 high Merlin, who is positioned to the left of the reels, will be closely observing your gameplay.

When Merlin's Magic Respins is first loaded, audio options are available. You can access the settings menu by clicking on the gear wheel icon in the top right corner of the screen. If you later change your mind and decide you do want audio, after all, you can find it there. If you were wondering where the betting controls were, you may also adjust your bet level on this screen. With a maximum bet of 250 coins per game, wager 0.01 to 5 coins per line.

Once you’ve tinked with the settings and set your wager, you’re ready to play the Merlins Magic Respins slot. 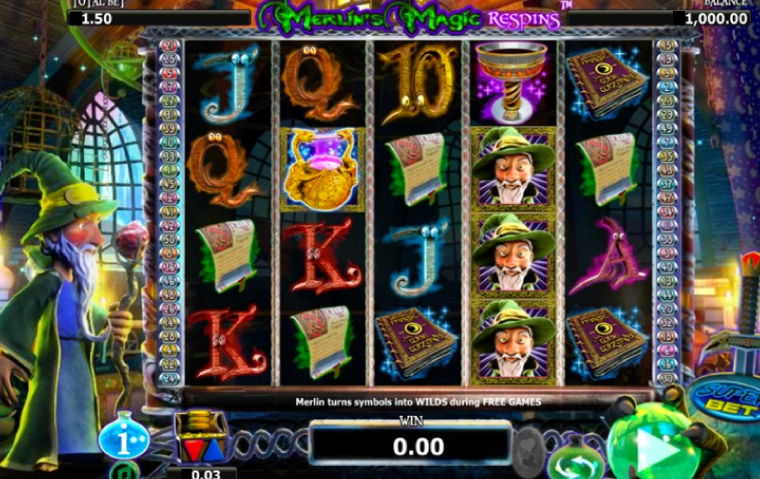 The Merlins Magic Respins slot bonus features are as follows:

Merlin is the wild. The wild can be used in lieu of any other symbol—aside from the scatter—to form a winning combination because it is a substitute.

In the regular game, Merlin will only show up on reels 2, 3, and 4, but during the wild respins round, he will show up on all of them. Merlin can show up either singularly or stacked. This symbol likewise offers substantial payouts, up to a maximum of 1,000.

The scatter cauldron, which only appears on reels 2-4, is the second unique symbol. This unlocks the game's free spins round and gives out insignificant prizes for successful matching. Any three in any combination will grant the player seven additional spins.

This game's exclusive feature, wild respins, can be accessed by turning on the super bet metre to the right of the main game. From levels one through five, the super bet feature (an additional wager) will grant players the equivalent number of respins.

Merlin wilds, including stacked Merlins, can show up on all reels during respins. Any full stack that shows up on the reels will grant further respins in addition to being held for the existing respins.

If you’re feeling the magic from our Merlins Magic respins slot review and want to try the game for yourself, sign up and play today at Spin Genie.