Get ready to walk like an Egyptian with our Mega Pyramid slot machine review. While some may say that the Ancient Egyptian slot genre is old hat, you can't dispute that developers are continuously coming up with fresh and interesting methods to showcase the Ancient Egypt subject in the online slot market. This traditional theme has been combined with cutting-edge bonus features in Red Tiger's Mega Pyramid online slot game to fully capture the player. Thus, you won't be playing "just another Egyptian slot"; instead, you'll be enjoying a brand-new, thrilling online gaming experience. If all this sounds appealing to you, then keep on reading our Mega Pyramid online slot review to find out more.

The Mega Pyramid casino slot from Red Tiger Gaming gives players an engaging online gaming experience with its changing symbols and hefty free spins bonus. This atmospheric game has an astounding top prize worth 4500 times your wager and a 96.18 percent return to player (RTP). The transparent reels of the Mega Pyramid slot UK are located in the desert with a massive, enigmatic pyramid in the background. It has a very attractive design. While you play, a storm is brewing, and lightning and thunder will be heard in addition to the Arabic-style music. But the enormous Pyramid isn't just for show; it actually has a crucial role in the game. A giant eye may occasionally appear on the pyramid top stone (perhaps the iconic Eye of Horus), and a random symbol will be picked and duplicated on the reels, (but more on this later).

The Mega Pyramid slot online has both the standard low-value card suit symbols and four higher-value symbols that are representative of the ancient Egypt theme. With the exception of the Anubis symbol, which pays off with 2 on a payline as well, winning combinations require 3 to 5 similar symbols on a payline:

The Mega Pyramid slot machine has a theoretical RTP of 96.18%. The game is played at medium volatility, making it accessible to all players.

How To Play Mega Pyramid 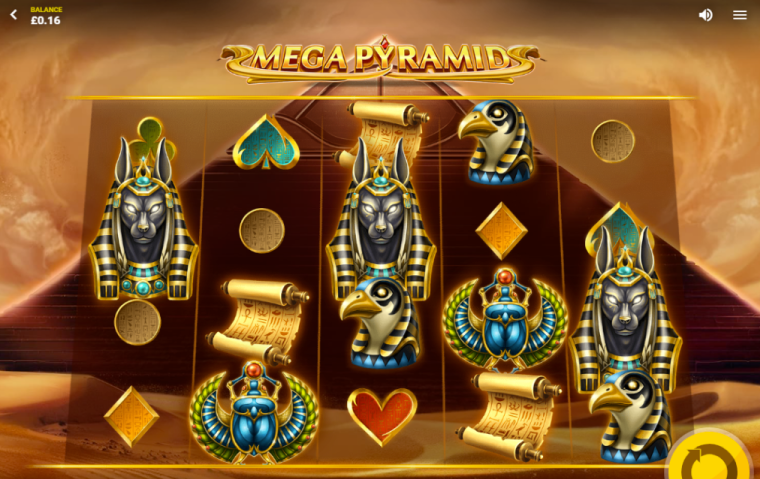 To play the Mega Pyramid slot load the game at SpinGenie. The Mega Pyramid mobile slot makes it possible to play this game whenever and wherever you like and on whatever device you choose. Once the game has loaded it’s time to set your wager. With 5 reels, 4 rows, and 30 fixed paylines, Mega Pyramid is a very straightforward game that can be played on all platforms for between 20p and £20 a spin. Once you’re happy with your stake all you need to do to play the Mega Pyramid slot is to click spin to set the reels in motion. The reels will then spin and stop at random, winning combinations are formed of three or more matching symbols across a payline starting from the leftmost reel. The only exception to this rule is the high-value Horus symbol, which offers payouts when only 2 are present on a payline. 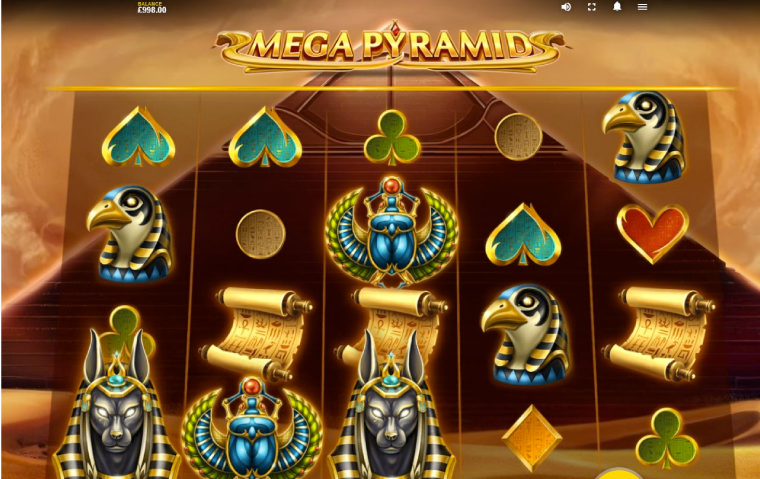 The Mega Pyramid slot bonus features are as follows:

The eye of the pyramid might randomly open and select one symbol. After that, that symbol will replicate and spread around the reel, adding 3 to 5 additional symbols and, ideally, resulting in a win. In order to increase your chances of landing a third scatter symbol, the pyramid will spin the reels once more if two scatter symbols land on them.

Ten free spins are awarded when three Pharaoh icons appear. The scatter symbols lock and transform into wild symbols throughout the extra spins. One tile was also selected that will randomly clone anytime it appears.

Any win that exceeds 0.10 per spin can be bet on. You essentially spin a wheel with spots for green and red. If you land on the green, you increase your winnings; if you land on the red, you forfeit your initial bet. Depending on how much you are ready to risk and how much you want to win, you can decide whether there are more green or red spots.

Try Out The Mega Pyramid Slot on Spin Genie

If you’ve enjoyed our Mega Pyramid slot review and want to try out this game for yourself then sign up and play today at Spin Genie.