Buckle up for a history lesson with today's King of Macedonia online slot review. So, for 10 points, who was the first truly great explorer as well as the ruler of one of the biggest empires the world has ever known? We are, of course, referring to the legendary Alexander the Great, who, at the age of 20, seized power in Macedonia and, within ten years, had ruled most of the known globe with an empire that stretched from Greece to India.

IGT's King of Macedonia casino slot has five reels and forty paylines. This epic-themed slot, playable from 80p per spin across all platforms, has 2 reel-wide Gigantic Wilds. For winning combinations involving a bonus symbol without a wild, the base game offers a random multiplier of up to 10x. Additionally, there is a King Free Spins Bonus feature where you are awarded 8 free spins with the wilds that activated the feature locked in place.

All of the symbols used in the King of Macedonia slot UK correspond to the slot's theme, as you might anticipate. Along with Roxana, the Queen of Macedonia, there are Greek vases and amphorae, a warrior's helmet, lutes, scrolls, jewellery boxes, and more (who pays out the most at 200 coins). Alexander serves as the game's Wild, as you might expect. He appears as a Gigantic Wild that covers two reels and is five symbols high while wearing his army uniform. With the exception of the bonus symbol, any portion of this symbol can match any other regular icon. A golden shield is used to represent the bonus symbol. In the base game, this can only land on the first reel.

The King of Macedonia slot online has a medium variance rating and is excellent for all gamers, whether they choose to play for low, medium, or large bets. Before any bonus feature is ultimately triggered, players should be ready to wait for approximately 100 spins, give or take; which is definitely something to bear in mind. The King of Macedonia online slot has a theoretical return to player (RTP) of 96.1%.

How To Play King of Macedonia 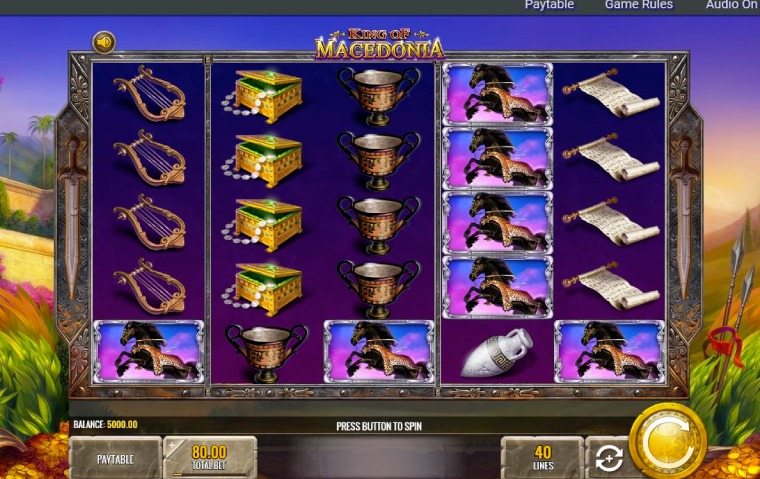 To play the King of Macedonia slot, load the game at SpinGenie. Unlike back in the days of history, the King of Macedonia slot is bang up to date and can be played on all devices via the mobile slot. Once loaded, you’ll need to set your wager. This slot caters to wagers of 80p all the way up to a jaw-dropping £1600, meaning that unless you’re a penny slots player, you’re going to find your wager here. Once you’re happy with your wager it's time to spin the reels.

With five reels, 40 paylines, and a 5X5 configuration, the slot machine functions similarly to most other slots. In order to win anything, a player must line up identical symbols along a payline from left to right. For the majority of symbols, a player must land at least three of them in a row to win. However, the higher-paying symbols pay out even if a player just gets two of them in a row. 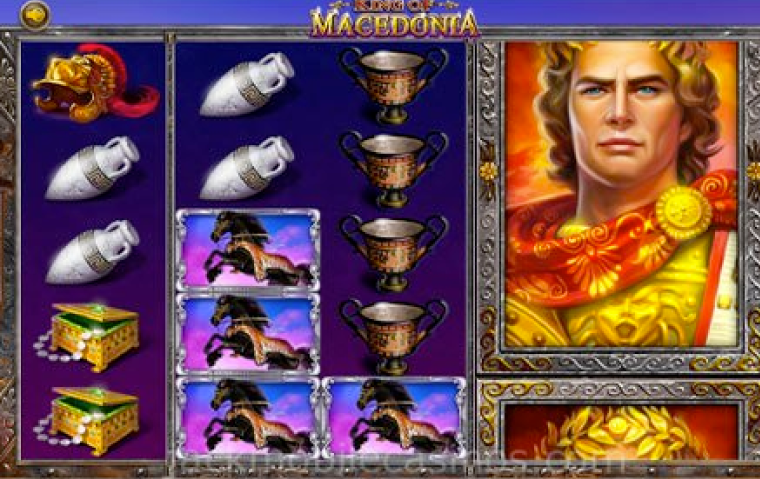 The King of Macedonia slot bonuses are as follows:

The King of Macedonia emblem is the wild; when it appears next to adjacent symbols, all but the scatter, it turns those symbols into wilds (Shield). The Gigantic wilds can completely cover reels 2, 3, 4, or 5, however, they only appear on the second and fourth reels, respectively. You will receive a modest windfall when this occurs.

When the Bonus shield scatters and the Gigantic Wild occurs on the first reel, the multipliers for the wins can be multiplied by 2x, 3x, 5x, and up to 10x.

When the Bonus shield appears on the first reel and the Gigantic Wild appears on reels 2 and 4, as in the majority of slots, the King Free Spins bonus is triggered, awarding 8 free spins. If a wild symbol shows up during the bonus rounds, it stays locked on the reels to increase rewards.

Play the King of Macedonia Slot on Spin Genie