Joker Troupe slot uk by Push Gaming has four reels, three rows, and ten chances to win, with bets ranging from.10 to 100 each spin. The RTP of 96.68 percent is slightly higher than the industry norm, and this is a high-volatility game where activating a bonus feature isn't as difficult as it appears. To know more, continue reading this Joker Troupe slot review.

Push Gaming's Joker Troupe casino slot is a wild and colourful online slot with a humorous theme featuring a troupe of jesters. The game has a unique combination of fruit machine styling and a more modern look. Even the fruits have been improved; instead of cherries and lemons, dragon fruit and starfruit have been introduced.

Overall, the game's design is really appealing, and you can know right away as it loads that you're in for a unique online gaming experience. On a 4x3 layout, the game has a total of 10 paylines with a maximum win of 25367 times your wager. This Joker Troupe slot machine review will also go over the bonuses and other elements of the game.

The infinity sign made of gold is by far the greatest payout symbol Joker Troupe online slot, and there are also several exotic fruit symbols on the reels. Visually, all of the symbols are well-done, with the red and blue orbs being the lowest-value symbols. To win, you'll need three or four matching symbols on a payline, and the paytable for Joker Troupe is as follows:

The RTP of Joker Troupe slot machine is 96.68 percent and has a high votality.

How To Play Joker Troupe 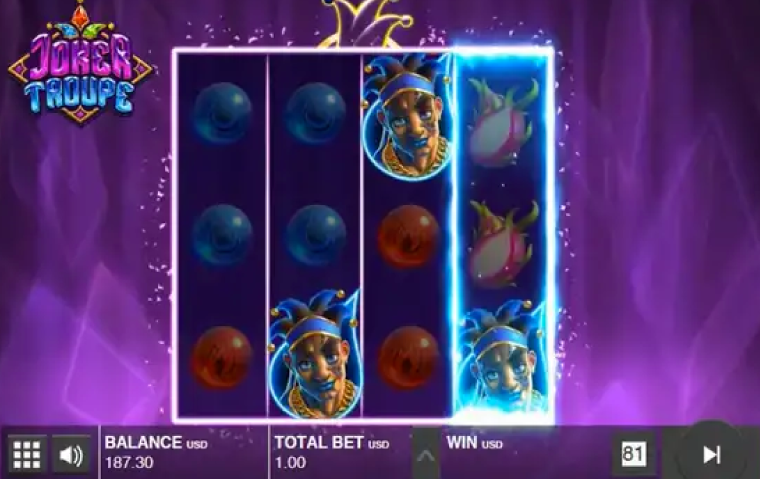 Your reel adventure can begin by pressing the Play button, which can be found in the bottom-right corner of the screen on all Push Gaming slots. Before any player makes any actions on the game, it is a good idea to check the bet amount, as the casino's default wager may be higher than what you planned to bet. The stakes on the Joker Troupe slot start at .10 and go up to a maximum of 100 each spin.

Three or four matching symbols must appear on the reel set, which includes ten paylines that are constantly active, to win the game. Joker Troupe does not have a Wild symbol, but it does contain three unique symbols that can be used to activate an extra feature, as well as a bonus symbol that can activate the free spins feature.

Joker Troupe mobile slot has a pretty robust paytable structure in terms of rewards. For three and four of a kind wins, the fruit symbols can pay between 0.5x and 3x. The remaining symbols, the dice and the infinity symbol, can pay anywhere from 1 to 100 times their original value. One important note is that the infinity sign can also be used to pay for two symbols. 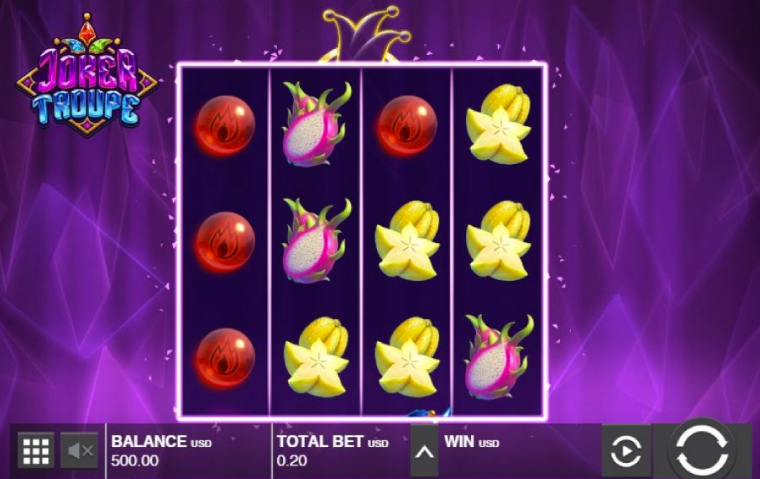 Joker Troupe slot bonus has three jokers: red, green, and blue, each of which has its unique bonus feature that may be triggered by matching three symbols anywhere on the reels.

A free spins bonus can last up to 20 seconds when the red joker appears. Each additional red joker resets the counter to ten seconds, extending the period and potentially increasing the number of winning outcomes.

The Green Joker Wheel, which has multipliers, is triggered by the green joker. If the wedge lands on one of the usual numbers, that number represents a payout for that amount, followed by a respin. The middle circle contains a 100x prize that may be won by stopping the wedge on the multiplier segments multiple times.

To activate the matching bonus, three blue jokers are required. This is a feature that includes sticky joker symbols and multipliers that can increase the bet by up to 25 times. If three red jokers appear during the feature, the player can win prizes ranging from 0.5x to 25x their stake.

To sum up this Joker Troupe online slot review, this game not only looks and sounds fantastic, but it also has incredibly exciting gameplay that can pay out in the millions. The HypermodeTM free spins feature, which offers endless retriggers, is both original and thrilling, and the other joker extra features are nearly as good. With a maximum prize of 25367x your stake, this is a must-try game from Push Gaming. Play Joker Troupe on Spin Genie and take home big winnings.

Get ready for Autumn with the Autumn Gold slot machine at SpinGenie. 18+ | Play Responsibly

Types of Online Casino Players - Which One Are You?

What type of casino player are you? Find out at SpinGenie18 + | Play Responsibly