Indian Ruby is one of the cult classics, and in this article, we’ll get into the details of the game.

In the SpinGenie Indian Ruby slot review below, you’ll discover all the essential details you need to know before you try this game for the first time. Our experts will walk you through its basic gameplay, bonus features, and much more.

Indian Ruby is a 5-reel slot set in (you guessed it) India. It’s a fairly straightforward game with 10 paylines (but you can play with fewer) and a unique Stampede feature that offers you more chances to win.

The game is set in a bright, colourful Indian street complete with authentic architecture, and the reels are filled with symbols inspired by Indian culture (as well as the usual royals). Animated symbols and sound effects help bring the game to life at key points, too!

Indian Ruby’s symbols include a mix of designs based on Indian culture, such as a beautifully majestic Elephant, a gleaming Ruby, and colourful Spices. Royal symbols (Ace, King, Queen, Jack, and 10) will appear on the reels, too.

Each symbol pays a specific amount for 3, 4, or 5 on a payline — for example, the Spices and Water Cups award 5x your bet if you match 5.

The Ruby is the Wild: this substitutes for other symbols and doubles the value of any winning combination it helps to create. The Elephant Bonus Scatter will trigger the bonus feature if you land 2 or more on the reels. You can read more about the bonus features later in our Indian Ruby online slot review.

The Indian Ruby slot UK has medium volatility and an RTP of 96.19%.

How To Play Indian Ruby 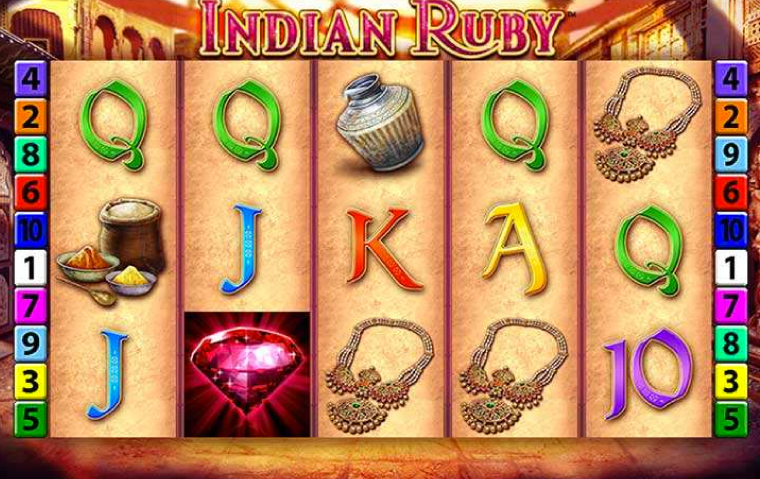 Merkur Gaming’s Indian Ruby casino slot is a 5x3 game offering a top prize of 10,000x. It includes a Stampede respins feature and a Gamble feature — both of which could boost your winnings significantly.

Just tap the SPIN button to start rolling Indian Ruby’s reels and see if you can form a winning combination with 3 or more symbols. You can adjust your bet from £0.01 to £10 between spins — just press the icon featuring a stack of coins to open the bet settings screen. If you want to increase your stake to the maximum instantly, press the MAX button. 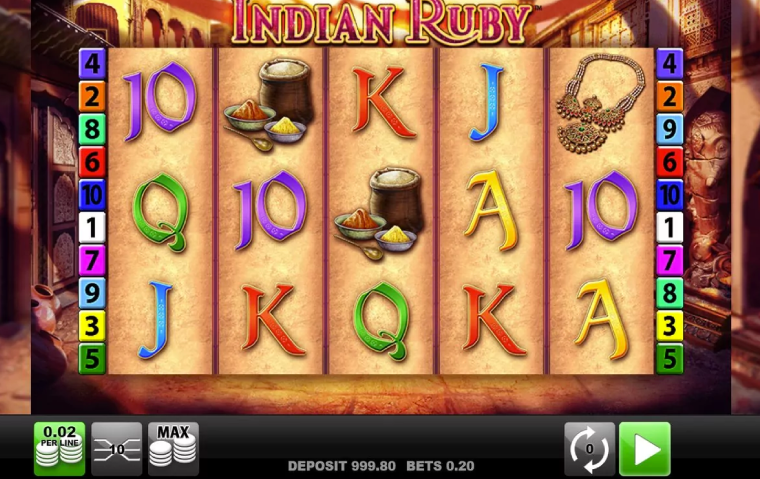 There are two bonus features in the Indian Ruby mobile slot:

Match 2 or more Elephant Bonus Scatters anywhere on the reels to trigger the Stampede feature. This is the main Indian Ruby slot bonus.

During the Stampede feature,  any Elephant Bonus Scatters and Wilds on the reels will be held in place while the rest of the symbols spin.

While the Stampede feature is the primary bonus in Indian Ruby, there’s a Gamble feature to try, too. This becomes available after any win.

You’ll see 3 buttons at the bottom of the grid: COLLECT, CARD GAMBLE, LADDER GAMBLE. Press COLLECT to add your prize to your overall winnings and go back to the base game.

But if you want to try to double your prize, tap the CARD GAMBLE or LADDER GAMBLE button to start the corresponding bonus game.

The Card Gamble game involves predicting the colour of a face-down card (red or black). After you have made your selection, the card will be flipped and you’ll either double your win or be sent back to the base game without your winnings.

During the Ladder Gamble game, press the 1:1 button to either take a step up or down the prize ladder. You may keep increasing your initial win or forfeit it altogether depending on where you land.

But the COLLECT HALF button is available if you want to cut the stake for the gamble games in half and take the rest as winnings instead.

If our Indian Ruby slot machine review inspires you to try Merkur Gaming’s slot, you can play Indian Ruby slot at SpinGenie today. We have hundreds of other top tiles to explore, too, from the industry’s biggest brands!