In the Immortal Guild slot, you'll venture into a fantastical forest on a treasure hunt. Push Gaming created this slot machine with a fantasy theme, which has 5 reels and 1,024 chances to win. The Warrior, Mage, and Hunter symbols are in the centre of the action and can award respins when two or more appear in a vertical line. The symbols that activate the game blend and combine to create a multiplier. The second feature is a standard round of free spins during which new wild symbols are added. In this incredibly unpredictable slot, payouts have reached as high as 48,511 times your total bet.

The environment for the Immortal Guild slot UK is a lush wooded region. The amazing cartoon-style graphics that have come to be associated with Push Gaming are still present. A humanoid face is staring back at you from beneath a massive tree while leaves that have been lighted by the sun's rays are lazily floating in the air.

There are 4 lesser value coins and 3 middle-value guns on the reels of the Immortal Guild casino slot (crossbow, sceptre and sword). The Dwarf, Mage, and Warrior are three additional character symbols with larger payouts. The highest paying symbol is the warrior, which pays out 1.2, 2.4, or 6 times your bet when three, four, or five of them appear together.

The wild is represented by the gold lion. Only able to appear during the free spins, this can replace all symbols other than the scatter. The scatter Immortal Stone completes the emblems. You'll trigger the Free Games feature if this happens on the first, third, and fifth reels in the same spin.

The Immortal Guild slot machine accepts bets between 25p and £100 per spin.

A higher than normal RTP of 96.55 percent may be found on the Immortal Guild slot machine online. The return to player rate is not the only aspect of it that is high. The difference is also. It is a slot that fluctuates a lot and falls firmly within the high category.

How To Play Immortal Guild 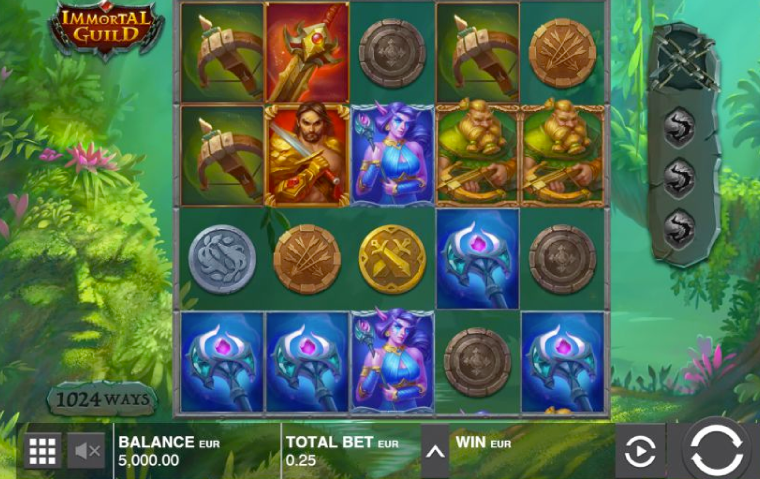 To play the Immortal Guild slot, load the game at SpinGenie. The Immortal Guild slot is playable on any tablet, phone, or computer, via the mobile slot. Due to the fact that it is an HTML5-powered online slot, there is no need to download any software in order to play it. The graphics are fantastic and the game runs smoothly on mobile devices.

Once loaded, all you need to do to get started is enter how much you’d like to wager per spin. The game's paytable will adjust according to the amount you enter, so you can preempt prospective payouts based on your bet. Once you’re happy with your stake, just click spin to set the reels in motion. 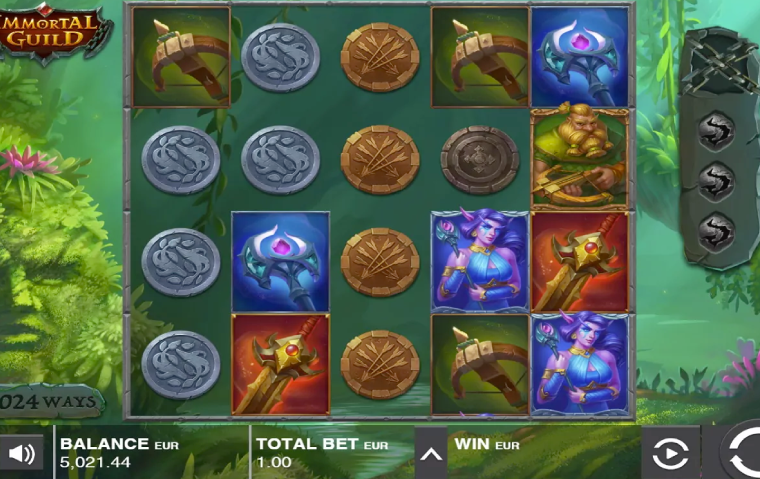 The Immortal Guild slot bonuses are as follows:

The wild symbol, which can replace all other symbols other than the scatter, is a lion. The free spin bonus round is the only time it shows up.

Avalanching reels are comparable to this feature, but not the same as the special symbols known as the Warrior, Mage, and Hunter disintegrate. This feature is activated whenever two or more matched symbols display vertically next to one another.

These will collapse downward, and if two symbols fall on top of each other, you'll get a multiplier; if three do, you'll get a 3x multiplier. Then you receive another spin, presumably resulting in more of this symbol, but this time any wins come with a multiplier.

Landing three scatter symbols will start seven free spins for you. The collapsing reels only transform the final remaining symbols into a wild with a multiplier during the free spins bonus round.

Come and Play the Immortal Guild Slot on Spin Genie

If you like what you’ve read in our Immortal Guild slot review, then sign up and play today at Spin Genie to try out this fantastical slot for yourself.