Settle down, because today we’re telling you a fairytale with our Humpty Dumpty online slot review. The Humpty Dumpty slot Uk is a Push Gaming five-reel slot with a traditional nursery rhyme theme, including 25 paylines and 10 symbols, including a king, queen, maiden, knight, and spoons. While the characters come to life in amazing animation, the player can spin the egg himself on the middle reel to win six free spins. If this sounds like some good fairytale fun to you, then keep on reading our Humpty Dumpty slot machine review to find out more.

Players frequently relate to topics that are familiar to them, and who wasn't taught a few nursery rhymes as a child? Even while it seems a little strange to use a nursery song, players will undoubtedly be familiar with this characteristic egg. You cannot fault Push Gaming for coming up with such an innovative idea, and the presentation of this slot reminds us of Shrek.

Once you get past the oddity, you'll discover that you're actually having a great time. Humpty Dumpty has been dumped into a world of pastel pink that is reminiscent of an old European city with its original backdrop.

The symbols in the Humpty Dumpty slot machine include fantastic images of a King, a Queen, a Maiden, a Knight, and his fine steed are included among the normal 10, Jack, Queen, King, and Ace. While lining up any of them will get you some cash, the crossed spoons, a heart, or Humpty himself are what you truly want to discover.

The crossed spoons will operate as a wild symbol and can be used in place of all other symbols—aside from the heart and Humpty—to form winning combinations that result in payouts. A respin will start when one or more of these crossed spoons land on any unlocked reels. Any wild symbols within this will respin by precisely one symbol position on any unlocked reels. Let's hope those are the winning symbols!

How To Play Humpty Dumpty 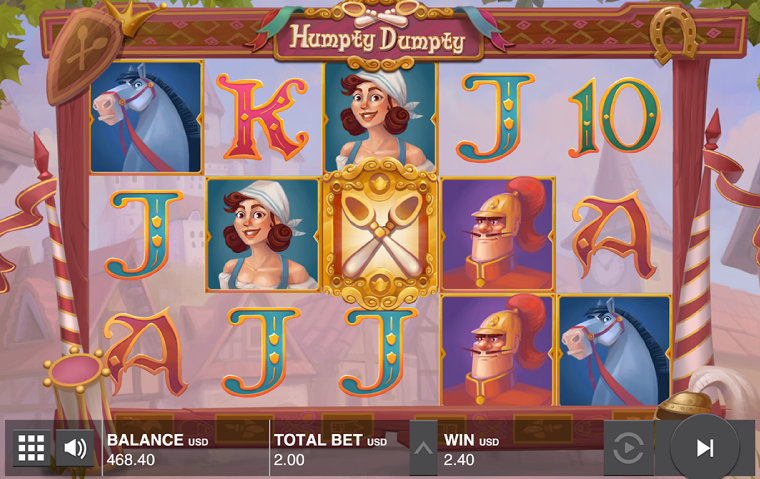 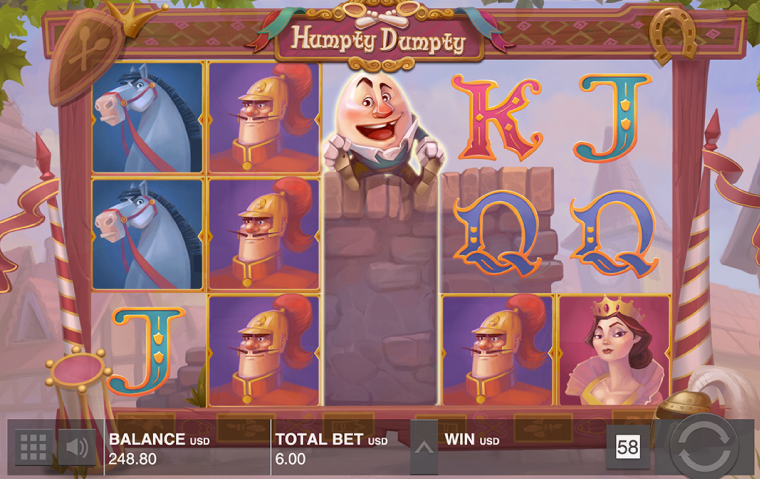 The Humpty Dumpty slot bonus features are as follows:

You get a respin each time a wild symbol lands on the reels. A second chance to form a winning combination is provided by the exact 1 position movement of the reel on which the wild symbol appears.

You will be given six free spins when you land the full Humpty Dumpty symbol on the centre reel, activating the free spins bonus. Although it may seem a bit meagre, there is room to increase your chances of winning by gathering heart symbols.

Any time the heart symbol appears on one of the centre three reels during the feature, it will be collected. Once you obtain three of a kind on the same reel, that reel becomes stacked wild and stays in place for the balance of the bonus round.

The metre above each reel lets you keep track of how many hearts you've amassed. During the free spins, the Falling Wilds Respin feature is also active.

Come and Play the Humpty Dumpty Slot on Spin Genie