Hong Kong Tower online slot is a 5-by-3 video slot from ELK that has big colourful symbols spinning against a backdrop of the reflecting windows of a massive skyscraper. It's best played in full screen mode. This slot features a 96.3 percent return to player (RTP), a high amount of volatility, and a jackpot of 301,650 coins. To learn more, keep reading this Hong Kong Tower slot review.

The gorgeous graphics are complemented by symbols that have been cleverly designed. Simple icons representing elements – fire, air, water, and earth – appear on the paytable, but these are lower-paying symbols. You can get a lot more for five bonsai trees, diamonds, lotus flowers, and golden lucky sevens. The Hong Kong Tower slot machine is unique in that it does not include a traditional Wild symbol. Instead, it has a Mystery symbol and a Bonus symbol to help it out.

On the reels of this game, there are fluorescent type flowers, as well as a Hong Kong Tower logo sign that serves as the Mystery symbol, which contrast nicely with the Hong Kong Tower. The Golden Seven and Bonsai are two other games that pay out equally.

The return to players rate of Hong Kong Tower mobile slot is 96.3 percent and is highly volatile.

How To Play Hong Kong Tower The Hong Kong Tower slot is played on a five-reel, three-row playing field. The slot machine features a stunning 99 chances to win. The slot has connecting paylines, which explains the odd number of paylines.

You can generate winning combos as long as the paying symbols touch each other from left to right. Consider it a hybrid of traditional paylines and the wind-all-ways concept. The betting range goes from  0.20 to 100 every spin, making this slot suited for both low rollers and high rollers. The mystery symbol in Hong Kong Tower casino slot can contain any of the other symbols, including the bonus symbol. The Diamonds and Sevens payout the most: 1,500 coins and 1,000 coins, respectively, for five of the same symbols on an active payline.

A red Yin Yang bonus icon also activates the main function. Three or more of the aforementioned Yin Yang bonus symbols anywhere in view can also activate the game's major bonus feature. Landing three symbols will get you into the game, while landing four and five symbols will give you one or two extra lives. The game will move to a screen with a Wheel of Fortune-style game, in which you will have to spin the wheel to land on a prize with a fixed cash value. 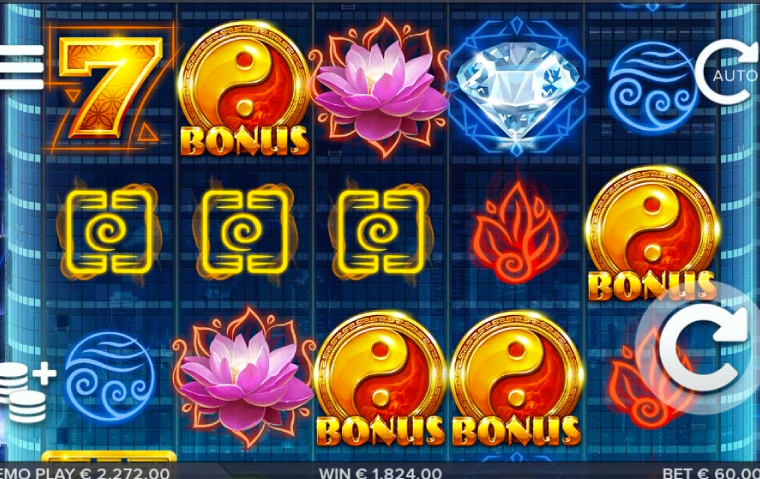 Three skywheels adorn the top of the Hong Kong Tower slot uk. These are extremely potent bonus games with ever-increasing prize pools. Every hit is rewarded, ensuring that you'll always come out on top. The wheels spin and winnings build until a wheel segment is hit a second time, at which point the sum is given out again before the game returns to its previous condition. The level up arrow takes you to the next wheel in the game.

To cap off this Hong Kong Tower online slot review, let us zero in on its highlights. The payout percentage is high enough to put this slot on anyone's must-play list, and the action in both the main game and the bonus rounds makes it more entertaining than others. With a jackpot of 301,650 coins, this game has the potential to be quite lucrative. Play Hong Kong Tower slot on Spin Genie and take home big winnings.