Take a spin on Hit It Hard and see if you can break the bank to win a massive top prize! Hit It Hard looks just like a traditional slot machine, with slick graphics and amazing detail, so it’s ideal if you’re looking to capture that authentic slot experience online!

SpinGenie’s blog section is packed with in-depth reviews for our popular slots, and this Hit It Hard slot review covers everything you need to know before you play it.

Hit It Hard is a slot with three reels, three rows, and five paylines. It’s presented as a virtual slot machine in the classic style, with a set of reels on the cabinet’s lower half, flashing lights, and a digital text display scrolling along the bottom of the screen. The top section of the cabinet lights up when you trigger the Bonus Game, as you roll dice to move around the board and play fun features!

Incredibly, you can win a jaw-dropping top prize of 250,000x your stake if you unlock the Bank — we’ll cover this later in our Hit It Hard online slot review.

The symbols in the Hit It Hard casino slot are classics: sevens, BARs, and fruits. The Red Sevens are the most valuable, worth 50x your stake for three. Land three Blue Sevens or Green Sevens to win 25x or 10x your stake, respectively.

The Red BAR symbol awards 5x, the Blue BAR is worth 4x, and the Green BAR pays 3x. Match three Watermelons to win 1.50x, three Oranges for 1x, and three Cherries for 0.50x.

How To Play Hit It Hard 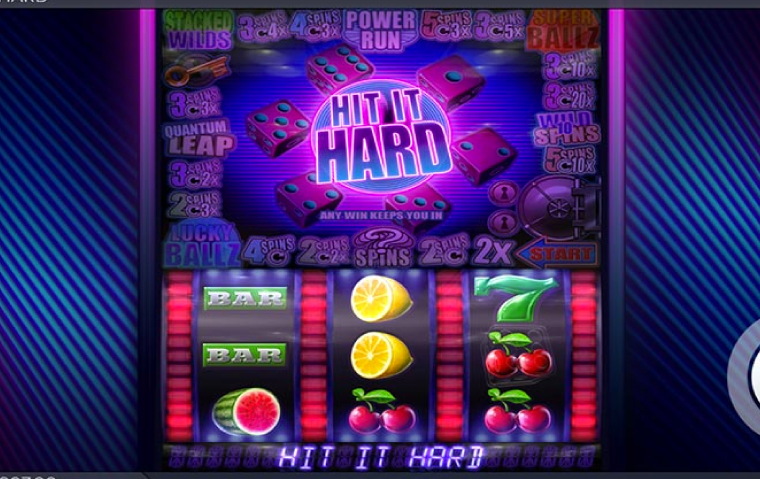 It’s easy to play Hit It Hard slot at SpinGenie. Just tap the ‘spin’ button to spin the three reels — match three identical symbols across a payline to win a prize!

Use the coins icon in the bottom-left corner to open the bet setup menu. Choose your stake from various options.

We recommend that you check the user-friendly paytable and rules pages before you try Hit It Hard. Press the hamburger/menu button to access both sections.

If you land a Dice on the middle position of the third reel, it will transform into a 10x Wild multiplier and trigger the Hit It Hard slot Bonus Game.

The Bonus Game is played with the Bonus Game board on the upper half of the slot machine, beginning at the Start arrow. A dice roll determines what your next movement around the board will be and the number of spins awarded. Win on one or more of these free spins to keep the Bonus Game running for longer.

This pachinko-style game awards you four shots to hit the cups and gives a guaranteed win.

Another pachinko-style game, though you have unlimited balls to use instead of just four. You can keep playing until a ball hits a cup that has already been hit. This feature is a guaranteed win, too.

The Wild Respins feature triggers in the Bonus Game, and awards 10 spins with a random Wild multiplier of up to 10x on the third reel.

The Quantum Leap feature transfers the gameplay to a random area on the Bonus Game board, further away than a dice roll can take you.

With Power Run, a new dice roll reveals the current end section of the Bonus Game board, and any features along the path to the end section are played one at a time.

Land on two Keys to unlock the Bank on the board: this awards the top win in the Hit It Hard mobile slot and brings the Bonus Game to an end!

Hit It Hard Slot on SpinGenie

Hit It Hard is a dynamic slot with retro charm, a unique Bonus Game, outstanding features, and a huge jackpot up for grabs. Now that you’ve read our Hit It Hard slot machine review, sign in and play it here at SpinGenie today!