The Golden Fish Tank online slot by Yggdrasil is a five-reel, three-row, two-pay line video slot with stunning visual features and enticing bonuses. Dive in deep for some freshwater fun, and the symbols will appear to be floating in the water, complementing the undersea theme and giving the characters genuine depth and individuality.

There's a conventional video slot setup with 5 reels and 3 rows on display. There are a total of 20 paylines on which you can wager. Although you have the option of changing your overall wager, certain lines have been put in place. There's also the Golden Bet feature, which we'll discuss when we look at the Golden Fishtank slot bonuses later.

Nobody can now claim that Yggdrasil is lacking in terms of graphics and animations. It's one of the greatest in the world at this, and the Golden Fish Tank slot online reflects that fact. Starting with playing card suits, there are some fantastic symbols on the slot's reels. The blue diamond, green club, purple spade, and red heart are all examples of these. Then there are the more lucrative fish symbols, such as the angelfish, which can pay up to 12,5 times your wager if five appear on a full pay line.

If you love slots with high RTP’s then the Golden Fishtank slot UK is definitely one you’ll want to try as it has an RTP well over the market average at 96.4%. The Golden Fishtank casino slot is played at medium volatility, making it a game that's accessible to players of all skill levels.

How To Play Golden Fishtank 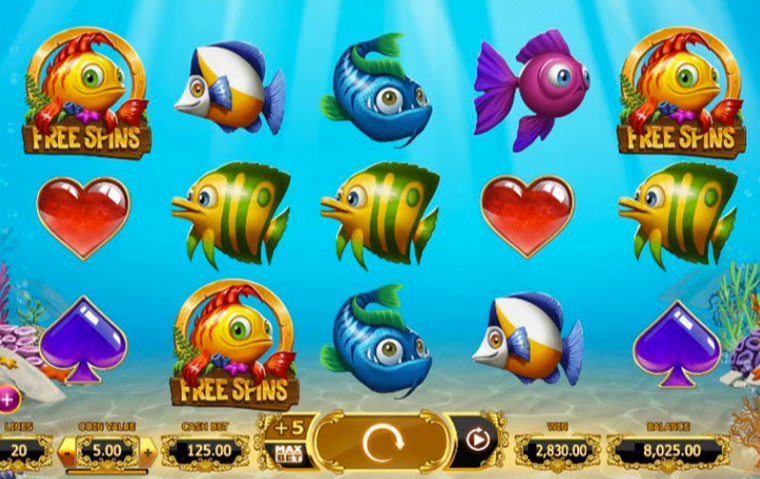 To play the Golden Fishtank slot, load the game at SpinGenie. All games playable at Spin Genie are optimized for all devices so the desktop and Golden Fishtank mobile slot are one and the same. Once you’ve loaded the game on your favourite device, you’ll need to decide how much you’d like to wager. Available to play from 20p to £125 per spin, you can adjust your stake by using the – and + buttons on either side of the bet selection menu. Once you’re satisfied with your wager, simply click the spin button to set the reels in motion. 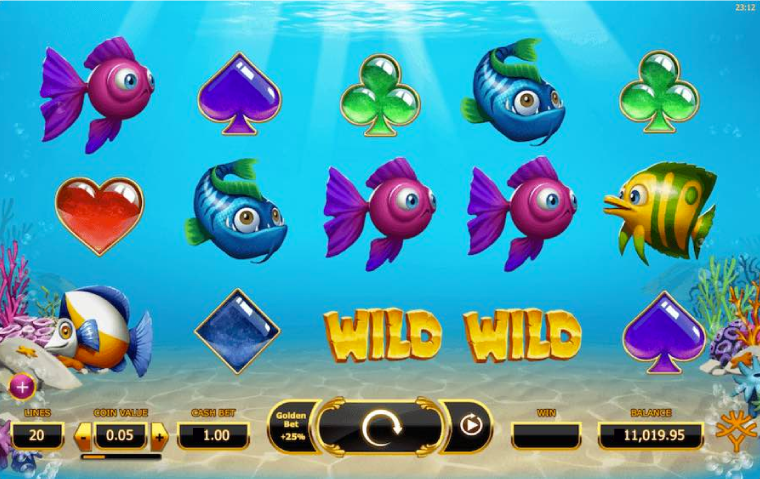 To begin the game's special features, you can benefit from the addition of a Wild Symbol. The wild symbol is a golden angelfish with the word ‘wild’ written beneath it, so it’s impossible to miss! This symbol can occur on any of the slot's reels, and when it does, it will replace all other symbols except the free spins symbol. Wilds can be used to create the highest potential winning combination, making them even more enticing as a symbol in Golden Fish Tank.

The aforementioned free spins symbol, which features a golden fish, triggers the free spins bonus. To trigger it, you'll need to spin at least three of these symbols onto a winning pay line, with varied sums awarded based on the number in view.

As an example, consider the following scenario:

If you use the relevant button from the bottom of the reels to activate the Golden Bet, you'll be playing with a bet that's five coins higher. If you manage to trigger the slot's free spins round while this is active, you'll receive one additional feature pick on top of the number previously included.

There are six feature pick features to choose in the Golden Fishtank casino slot from which are as follows:

If you enjoyed our Golden Fishtank slot review then sign up and play today at Spin Genie to try out the slot for yourself!