Gladiators slot is a Play'n Go slot game featuring 20 always-active paylines, five reels, and three rows. It features four gladiators and five randomly occurring reel modifiers, as well as boosters that can help you win big. Play for a chance to win a 5000x cash reward with a 96.42 percent return on investment. Continue reading this Gladiators slot review to know more.

Gladiators slot uk is an exciting Play n Go online slot with 20 paylines and a hefty top payout of 250x. The theme introduces a group of gladiators dressed in full battle attire and ready to fight. The symbols on the reels can turn up a set of winning combinations as the conflict progresses, resulting in modest, medium, and large prizes. Symbol payouts featuring gladiators result in animated sequences, adding life to a game that already has a rather cheerful style of play.

It all happens on three rows and five reels, with 20 always-active paylines on which you can win up to 5000x your line wager during the free spins if you gamble on them. This Gladiators slot machine review will also show you the slot game's bonus rounds, features, expanding Wilds and re-spins.

You will be able to interact with a number of individuals when you first start Gladiators casino slot. A tiger, as well as masked gladiators named Scissor, Provocator, Murmillo, and Retiarius, can be found inside. The high-paying icons in the slot have payouts that vary based on the icon and how many times it appears on a payline. The following is a list of the symbols and their associated awards.

Gladiator Scissor - pays 200x for 5 on a payline

Gladiator Provocator - pays 150x for 5 on a payline

Gladiator Murmillo - pays 100x for 5 on a payline

Gladiator Retiarius - pays 100x for 5 on a payline

Card suit symbols - The 4 low-value symbols give out either 2.5x or 1x for 5 on a payline

The RTP of Gladiators mobile slot is 96.42 percent and has a high volatility.

How To Play Gladiators 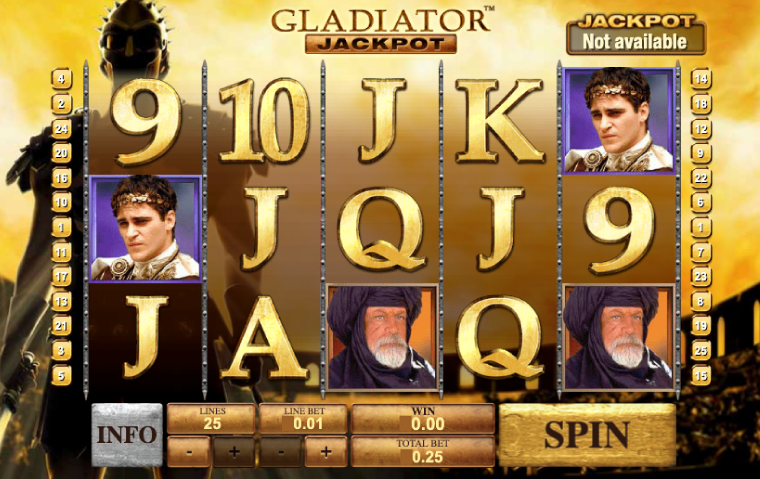 Gladiators online slot has 20 paylines that are constantly active, all you have to do to get started is set the wager per spin amount. Players have a wide range of possibilities in this regard, starting with a 0.20 stake and going all the way up to a 100.00 bet. Simply select one of the squares on the sliding scale of bets that has an amount in it to start the reels spinning. When three gates appear on the reels, the free spins bonus is triggered. You must first choose your Champion before you may use this advantage. You can retrigger the bonus in Spartacus, but Amazonia can boost your profits by 20 to 100 times.

A group of fighter symbols is added to the Battle Metre when they appear on the reels. You will find this just above the reels. When your Champion symbol appears on the reels, the Battle Metre warriors attack. If you win the combat, you'll be awarded the Champion's reward. You will be rewarded for each warrior symbol you defeat, even if you lose. Fun base game bonuses can also be activated at any time. 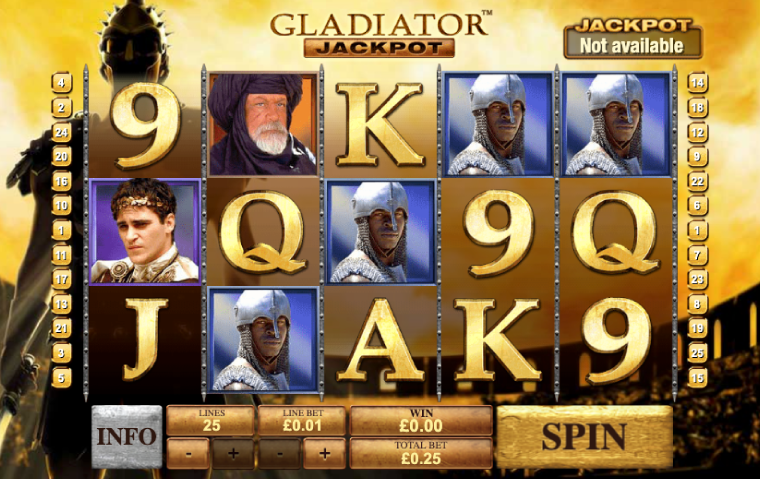 Any of the five features can be activated at any time, and each one causes something to switch or spin on the reels:

In Gladiators slot bonus. When three gates appear on the reels, the free spins bonus is triggered. You must choose your Champion before you can begin this benefit. Spartacus offers the option to retrigger the bonus, while Amazonia can increase your winnings by 20x to 100x.

To wrap up this Gladiators online slot review, let's look at the game's twofold strengths. Gladiators provides gamers with an amazing online gaming experience that transports them to Ancient Rome and you can win up to 5000 times your bet. Whether you are new player or not, this game is for you. Play Gladiators slot on Spin Genie and get a chance to take home big winnings.