Try a taste of the high life with the loveable Foxin’ Twins. Win up to 500x your bet and discover multiple bonus features as you spin two sets of reels simultaneously!

Welcome to SpinGenie’s blog. Here, you’ll find a growing collection of reviews covering our most popular games, and in this Foxin’ Twins slot review, we’ll explore this unique game in detail!

Foxin’ Twins is set in the same cute, cartoonish world as Foxin’ Wins, a massively popular slot you might have already played. It stars a pair of fox twins, and offers you the chance to win big prizes and experience fantastic bonus features.

One of the most incredible parts of NextGen Gaming’s Foxin’ Twins casino slot is its unique double-reels design, which helps it stand out from similar games. You play on two sets of reels containing:

Both sets of reels spin at the same time. You may trigger a random feature or the Team Pups Free Games feature on any spin — find out how these work later in our Foxin’ Twins online slot review.

The symbols in Foxin’ Twins relate to the family’s luxurious lifestyle, with golden gates, pink champagne, and jet planes aplenty.

How To Play Foxin’ Twins 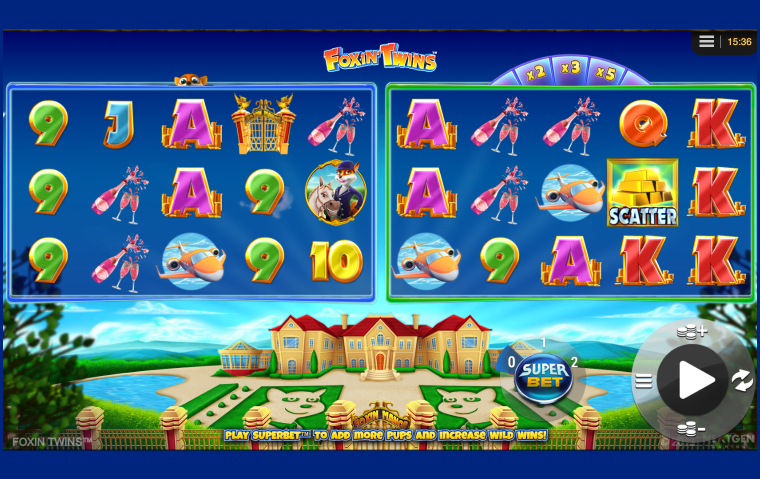 Foxin’ Twins may look totally different from most other slots you’ve played when you launch it for the first time, but don’t worry — it’s very easy to play!

Start by setting up your bet: press the ‘+’ or ‘-’ buttons above and below the ‘spin’ button to adjust your wager. Or use the hamburger/menu button to open the game menu, then tap the ‘coins’ tab to access the bet setup screen. Choose your preferred wager from several options.

Next, click on the ‘spin’ button to spin both sets of reels. If you can match three or more symbols on either grid, you’ll win a prize shown on the paytable! 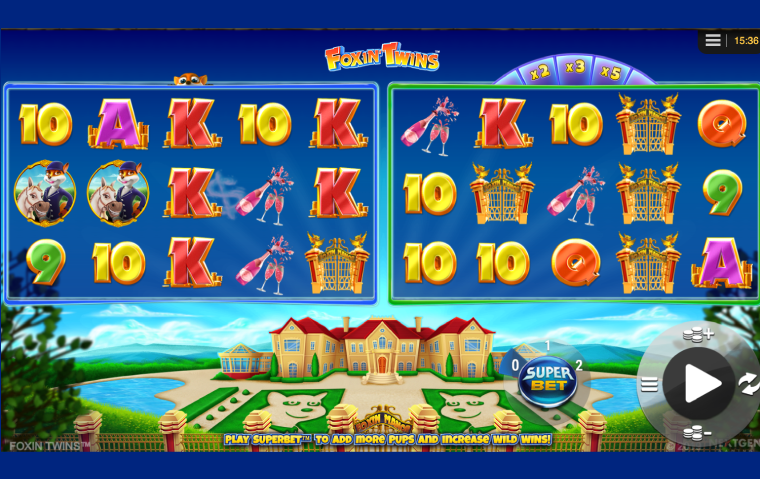 The Blue Wild substitutes for all other symbols apart from Scatters and the Green Wild. This only appears on the Reveal Wild (Blue) reel set.

The Green Wild substitutes for all symbols except Scatters and only appears on the Multiply Wild (Green) reel set, unless the A Little Wilder feature is triggered. In that case, the Green Wild can land on both sets of reels.

The Scatter pays for between two and 10 anywhere on the reels, up to 100x your bet.

The Superbet is an extra stake that you can use to access the following:

Fox Pups can transform one or more symbols into Wilds at random before a prize is awarded. Fox Pups also reveal Blue Wilds, unless the Gone Wild or A Little Wilder features are triggered. In that case, Green Wilds are revealed.

Any winning spins in which one or more Green Wilds appear are multiplied randomly by the value shown on screen.

This random feature may be activated at the start of any spin. Each Blue Wild on the Reveal Wild (Blue) reel set turns into a Green Wild for the present spin, and any extra Wilds added by the Fox Pups will become Green Wilds, too.

Fox Pups transform at least one symbol on the Multiply Wild (Green) reel set into a Green Wild before prizes are awarded.

Match Scatter symbols anywhere on the reels to trigger the Free Games feature. The number of Scatters that land determines how many free spins you win, with up to 100 spins available.

You could trigger both of the random features at the same time on each free spin. The Team Pup Free Games feature can be retriggered, too!

While writing this Foxin’ Twins slot machine review, we’ve been amazed by this game’s innovative design and terrific bonus features. It’s visually stunning, too, with fun graphics and cute characters to enjoy. So, what are you waiting for? Sign in and play Foxin’ Twins at Spin Genie today!