Football: Champions Cup is one of the cult classics, and in this article we’ll get into the details of the game.

NetEnt’s Football: Champions Cup is a brilliant slot based on one of the most popular sports in the world, and NetEnt has done a fantastic job of weaving football into the gameplay.

For starters, the action unfolds in a packed stadium, with the sound of cheering, chanting fans helping to create the atmosphere of a real match. But the stand-out feature in the Football: Champions Cup mobile slot could be the penalty shootout Bonus Game. This puts you into the most decisive stage of a match for a refreshing pick-and-click gameplay section.

And you can trigger a unique football-based Free Spins feature — try to take your team through the knockout stage of a championship right to the final to win a top prize!

There are 2 high-value symbols: a Scatter and a Bonus. Match 3 Scatters to trigger the Free Spins feature, and land 3 or more Bonus symbols to play the Bonus Game. We’ll cover these later in our Football: Champions Cup online slot review.

The medium-value symbols in Football: Champions Cup include essential elements of the game — a player, kit, boot, goalkeeper’s glove, and a whistle. You’ll win 1,000x your bet for the Player symbol, and 250x for the Whistle.

How To Play Football: Champions Cup 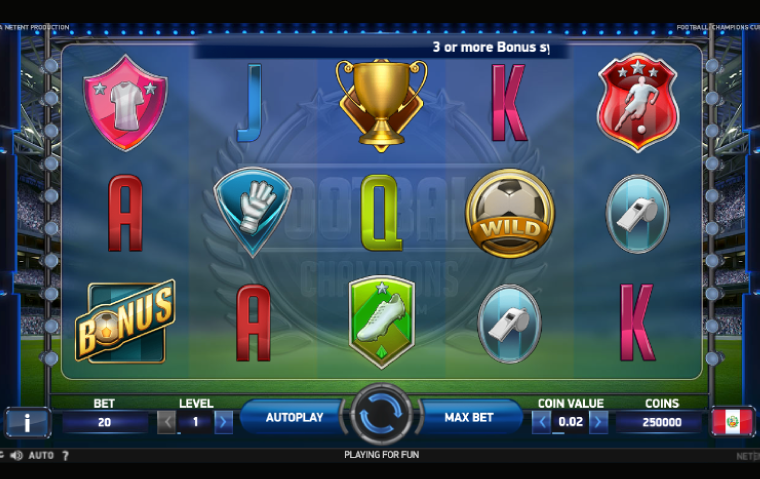 Football: Champions Cup is played on a 5x3 grid with 20 paylines. It’s easy to pick up from the start, thanks to the user-friendly control panel beneath the reels.

The base game functions like almost any other 5-reel slot: try to match 3 or more symbols on a payline to win. But the Bonus Game takes Football: Champions Cup in a whole new direction — you’ll actually take part in a penalty shootout!

That’s sure to impress football fans. And so is the Free Spins Tournament modelled on a championship knockout stage.

Press the SPIN button to play the base game, and use the buttons next to the LEVEL and COIN VALUE displays to adjust your stake. You can bet between £0.20 and £100.

It’s recommended that you explore the paytable when you play Football: Champions Cup slot for the first time. This contains information on how much each symbol is worth and other essential details. 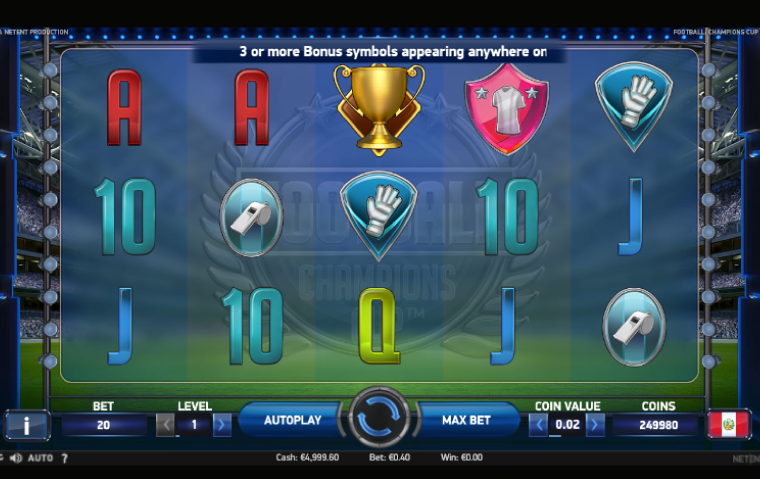 Wilds substitute all other symbols, except the Scatter, and pay up to 2,000x.

The Football: Champions Cup slot Bonus Game is a 5-round penalty shootout with 2 parts:

You’ll win if you can score or stop a goal.

Match 3 Scatters anywhere on reels 2, 3, and 4 to trigger the Free Spins feature. This follows the structure of a championship knockout stage: each free spins round counts as a match, and winning will take you to the next one — retriggering your free spins! Come in 3rd, 2nd, or 1st place to win 20x, 100x, or 500x your bet, respectively.

Whether you’re a footie fan or just want to play a slot unlike any other, this game is well worth a try. You can play Football: Champions Cup slot at Spin Genie now, as well as hundreds of other amazing games.

So, if our Football: Champions Cup slot machine review has inspired you to play, sign up and try NetEnt’s football slot today to see how much you can win!