Final Countdown Casino slot won't be short on the excitement with 6 Reels, 4,096 Ways to Win, and High Volatility; it promises to be an emotional roller coaster from beginning to end. Cloned reels, the Heading for Venus Free Spins round, Super Mega Wins, and significant multipliers are just a few of the special features that Big Time Gaming has pushed to the limit.

The setting for the Final Countdown slot online is a cityscape of tall skyscrapers that are silhouetted against a sky that appears bruised. Some of the towers have colourful light beams that shine up into the night sky, accentuating the impending rocket-powered trek to the stars.

Playing card symbols in neon-bright colours are used as low-value symbols on the reels. Higher-value symbols are represented by jewel-like colours. Two astronauts—a man and a female—who are prepared to set off on the arduous journey into space serve as the game's wild symbols.

The FInal Countdown slot machine has a fantastic theoretical RTP of 96.65%, which is nicely above the current market average. This does come at the cost of a high volatility rating, however.

How To Play Final Countdown 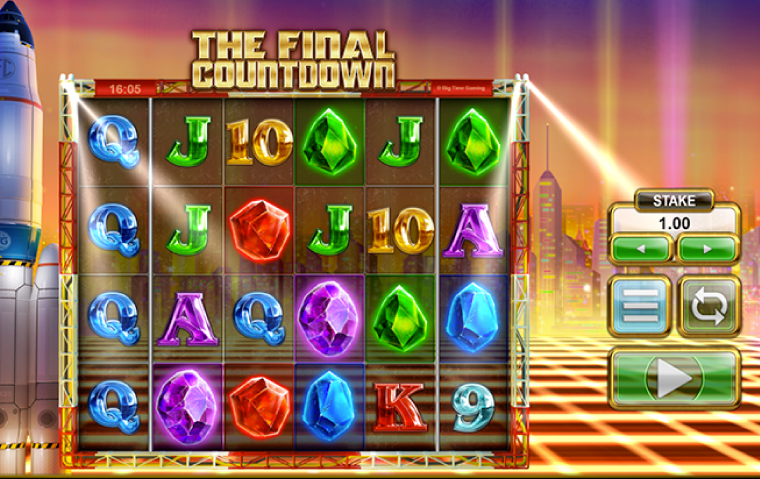 When playing The Final Countdown slot for the first time, you should be aware that all of the controls are at the bottom of the screen, directly below the reels. The game's controls are relatively simple to understand: 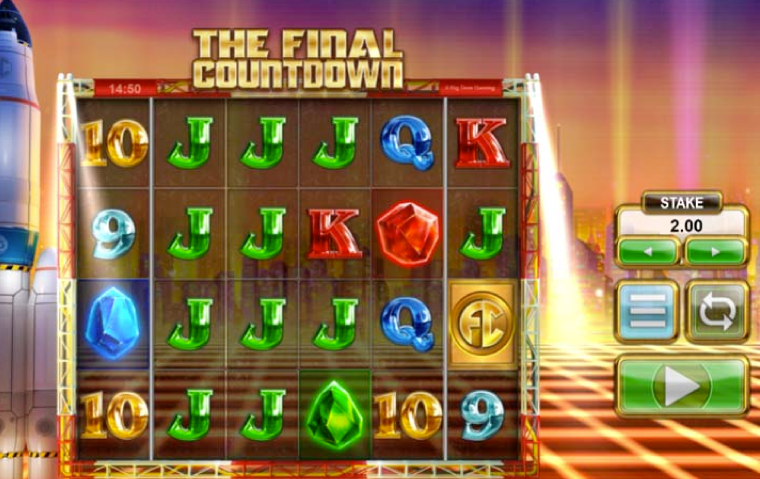 The most interesting slot bonus of the Final Countdown slot is the cloned reels bonus feature. There is a chance that the Cloned Reels feature will activate during each spin. When this occurs, two to four reels synchronise with one another, spinning identical symbols in the same positions. Only reels 2–5 are affected by this feature, which significantly raises the likelihood of producing winning combos.

When the reels synchronise, Wilds and Scatters can also be duplicated. When Scatters are involved, this may result in the Free Spins extra feature round being forced when three or more Scatters are present and may also result in a Scatter Pays win. Since Wilds can replace all symbols on the reels except for Scatters, any Wilds that appear on Cloned Reels grow in size, creating the possibility for further winnings.

Cloned Wilds grow in size in proportion to the number of reels they occupy. For any wins it contributes to, a Wild that appears on two cloned reels will produce a multiplier worth 4x. A Wild multiplier over three cloned reels is worth 27x, and when it covers all four reels, it soars to a powerful 256x, which can result in some incredible cash payouts.

The Final Countdown free spins bonus is activated when you get three or more bonus symbols. Extra huge wild symbols, which fill 2x2 spaces on the reels, will emerge throughout your 8 free spins. They move about the reels and are known as roaming wilds. The wilds will grow in size as you retrigger the bonus, and their multipliers will as well, giving you the chance to get multipliers up to 256 times.

The Heading for Venus round also comes with 15 bonus spins. Clone wilds will appear on the reels throughout this round, and you can multiply your winnings by 4 to 888 times.

If you’ve enjoyed our Final Countdown slot review and want to give this game a try for yourself then sign up and play today at Spin Genie. The Final Countdown slot can be played on any device you like including on the go via the mobile slot, so you can play whenever the mood takes you!