Not all that glitters is gold as you’ll discover in our Diamond Empire online slot review. Although your first sight at the screen could lead you to feel that the word Empire is too pretentious for the timeless tale that the Diamond Empire slot UK tells, you actually landed on a video slot with real soul. Wild multipliers and a wailing Wheel Bonus that conceals tonnes of cash prizes have been added by Microgaming. If this intro has dazzled you, then keep on reading our Diamond Empire slot machine review to find out more. 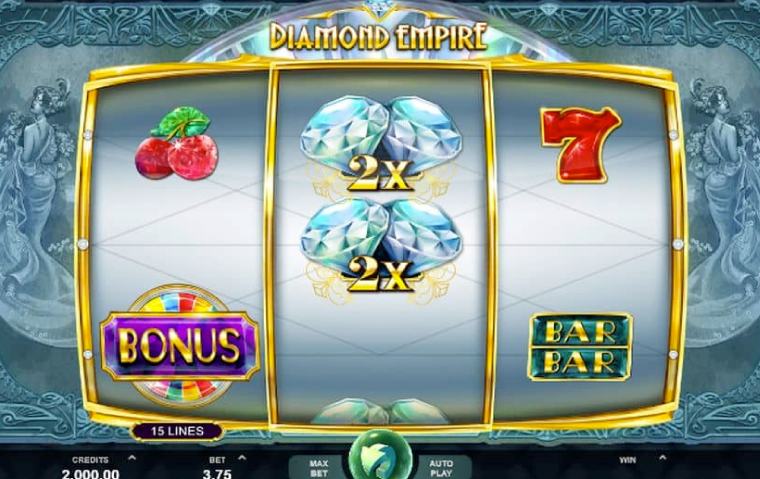 The Diamond Empire casino slot is made to dazzle despite its simple features. The reels really include a small number of symbols despite being set in an opulent environment where the walls are covered in priceless designs and embellished with platinum sparkles.

Contrary to popular belief, there is just one symbol in the entire narrative that a diamond, or more precisely two diamonds, represent. They are a huge, blazing wild symbol that can be used in place of any other symbol (except the Bonus icon) to make a winning combination; but more on this later in our Diamond Empire slot review.

The symbols used in the Diamond Empire slot machine are based on classic slot emblems. Below is the paytable alongside the top payouts for each symbol combo.

The Diamond Empire slot online has a theoretical return to player of 96.04%, with a high volatility rating, making it more suited to players with a dash of experience as opposed to complete slot newbies.

How To Play Diamond Empire

To play the Diamond Empire slot, load the game at Spin Genie, this can be done on any device you like, including on the go via the Diamond Empire mobile slot. Once the game has loaded, you’ll need to set your wager. There are fifteen fixed pay lines on the typical one-arm bandit's three reels by three rows configuration. The range of bets is from 15 to 150 coins every spin. Once you’re happy with your stake all you need to do is give the reels of the Diamond Empire online slot a spin. 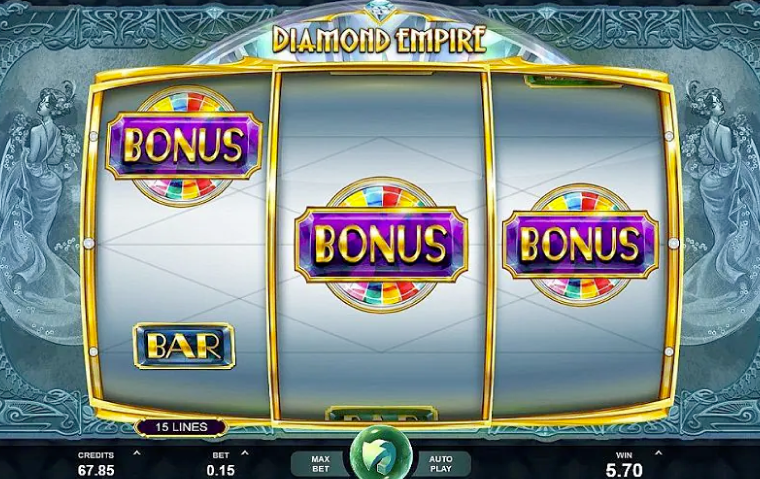 Beautiful wild twin diamonds multiply line wins by 2x or by 4x when exactly one or two occur in a winning combination in addition to replacing other symbols. Alongside this, the diamond symbols are the highest-paying icons in the game.

The Wheel Bonus, which is activated by three scattered Bonus icons, conceals a tonne of quick cash awards, up to an amazing 888x total bet!

At Spin Genie you can play tons of fantastic slot machines such as Diamond Empire on any device you like. Sign up and play today to discover your new favourite slot game.