Curse of the Werewolf Megaways is a cult classic, and in this article, we’ll get into the details of the game.

Pragmatic Play’s Curse of the Werewolf is a horror-themed slot featuring one of the most famous mythical beasts in the world. As it’s a Megaways game, there are up to 46,656 ways to win, and the retriggerable Free Spins feature includes a unique progressive structure. SpinGenie’s team has written this Curse of the Werewolf slot review to help you understand how it works, covering the bonus features, symbols, and more.

Pragmatic Play’s team has clearly had fun working on Curse of the Werewolf Megaways, and they have created a stunning game with lots of impressive touches. For example, it opens with an animated werewolf running through a searchlight, which sets the scene nicely. And the soundtrack is wonderful, too: listen out for the wolf howls and human screams playing alongside the spooky gothic music.

The symbols in Curse of the Werewolf Megaways are outstanding. Each character is highly detailed, with a cartoon-esque visual style and realistic lighting effects that help bring them to life.

The Werewolf pays the highest prize during the base game, offering up to 10x your stake. Four other character symbols feature local villagers, which award varying payouts. The Ace, King, Queen, Jack, and 10 symbols pay the smallest prizes.

Special symbols appear, too — we’ll cover them later in our Curse of the Werewolf Megaways slot machine review.

The Curse of the Werewolf Megaways casino slot is highly volatile, with a 96.50% RTP.

How To Play Curse of the Werewolf Megaways 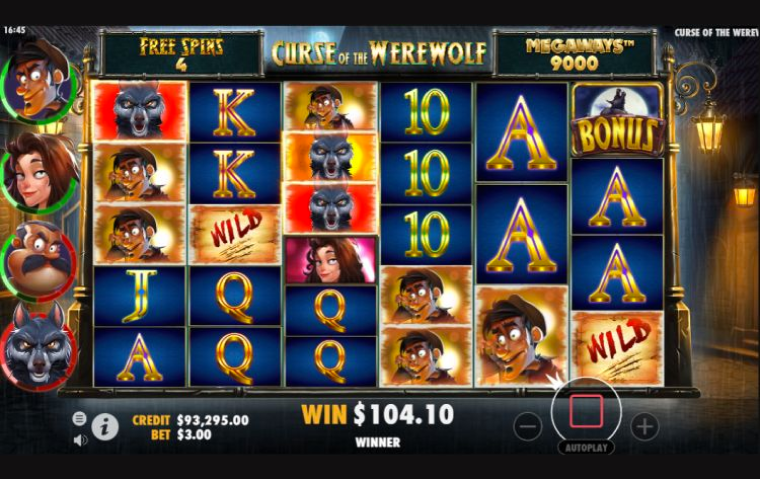 It’s easy to play Curse of the Werewolf Megaways slot on any device, thanks to the simple controls. Press the SPIN button to spin the reels — you need to create combinations of 3 or more matching symbols on adjacent reels to win.

At times, Wilds may appear on the reels and help you form winning combinations by substituting for other symbols. The Mystery symbol can land during the base game, too, and will transform into an identical symbol randomly. This may increase your chances of matching symbols.

The minimum bet available in the Curse of the Werewolf Megaways slot UK is £0.10, and the maximum is £100. To access the bet settings menu, tap the PLUS or MINUS button next to the SPIN button. 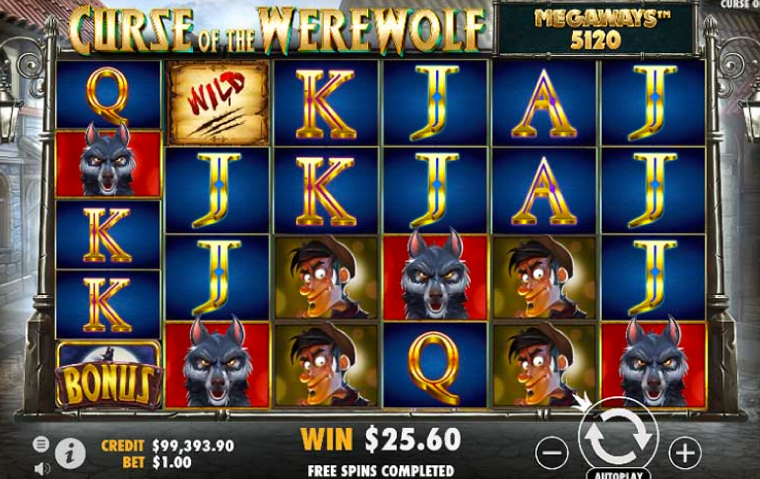 The Wild symbol substitutes for all symbols except the Bonus, Mystery and Attacking Werewolf symbols.

The number of Bonus symbols appearing on the reels will determine how many free spins you win:

You can retrigger the feature by landing 2 or more Bonus symbols, with up to 10 extra free spins available.

This symbol appears during the Free Spins feature only, and substitutes for the red Werewolf symbol.

The Attacking Werewolf symbol will take between 1 and 5 lives away from a high-value character. Any character who loses all 5 lives will be turned into a werewolf and replaced with strips of the red Werewolf symbol for the rest of the round. You’ll receive an extra free spin, too.

You can trigger the Curse of the Werewolf Megaways slot bonus feature instantly: just tap the Buy Free Spins button and pay 100x your current bet.

A Super Spin may be awarded randomly on any spin during the base game. This will be played with stacks of high-valued symbols.

You may also be given a spin with a guaranteed win at random, too.

Curse of the Werewolf Megaways Slot on SpinGenie