Step into Aladdin’s cave and discover amazing treasures! Pragmatic Play’s Aladdin and the Sorcerer slot offers a top win of 6,250x your stake, as well as plenty of other generous payouts.

You’ll find in-depth reviews packed with essential information on our most popular slots here in SpinGenie’s blog. And this Aladdin and the Sorcerer slot review covers its prizes, RTP, bonus feature, and more — so read on before you play!

Aladdin and the Sorcerer Slot Overview

Aladdin and the Sorcerer is a 5x3 slot with 20 paylines. Its fun theme is brought vividly to life with gorgeous graphics and slick animations. Having both characters on screen from start to finish gives the game a dramatic feel.

The unframed gems pay smaller prizes. Match three or more Red Gems to win up to 6.25x your stake. The Purple Gem is worth up to 5x, the Blue Gem pays up to 3.75x, and the Topaz Gem awards up to 2.50x. Finally, the Green Gem pays up to 2x.

There’s also a Wild symbol, an Aladdin symbol, and a Sorcerer symbol. We’ll cover these three later in our Aladdin and the Sorcerer online slot review.

Pragmatic Play’s Aladdin and the Sorcerer casino slot has a 96.23% RTP and is considered to have high volatility. You can bet between 0.20 and 100 per spin.

How To Play Aladdin and the Sorcerer 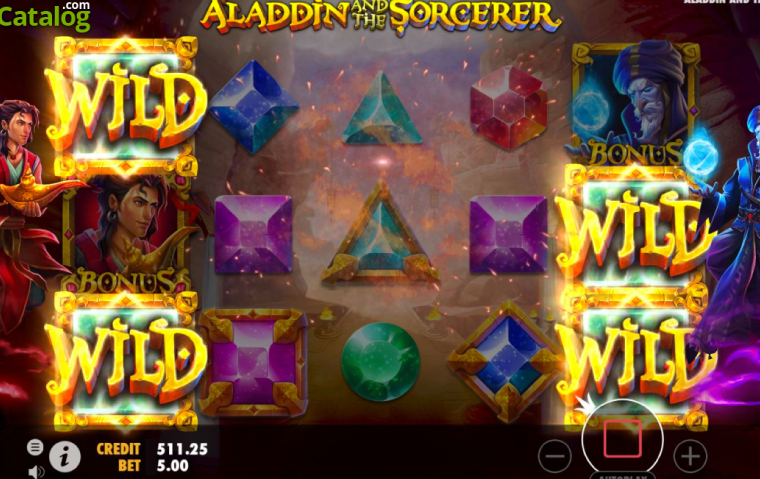 Ready to play Aladdin and the Sorcerer slot? It’s quick and easy to get started. First, set up your stake: press the ‘+’ or ‘-’ button next to the ‘spin’ button to open the bet setup menu. Here, you can increase or decrease your stake per spin with a few clicks.

Next, tap the ‘spin’ button to spin the reels! Match three or more symbols to win a prize shown on the paytable.

Want to check out the paytable and rules at any time between spins? Just use the ‘i’ button. 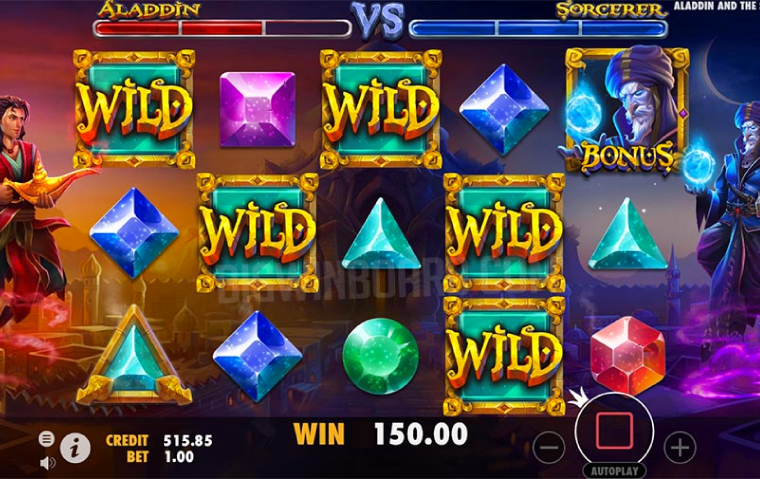 When Aladdin lands on the first reel without the Sorcerer appearing on the fifth reel, between three and six Wilds are added to the game grid in random positions.

When the Sorcerer appears on the fifth reel without Aladdin landing on the first reel, between three and six Wilds are added to the game grid in random positions.

But when Aladdin and the Sorcerer land on the reels at the same time, the first and fifth reels are stacked with Wilds. And the Respin Feature is activated!

During the Respin Feature, the reels respin continually until Aladdin or the Sorcerer is victorious in battle. Both Aladdin and the Sorcerer have three health bars at the start of the feature.

Three respins are awarded in the second level of the Respin Feature. Any Wilds on the reels in the previous respin stay on the screen until this feature ends.

All Wilds have a 2x multiplier during the second respin, and multipliers on the same payline add to one another. During the third respin, each Wild symbol has a 3x multiplier.

Aladdin and the Sorcerer Slot on Spin Genie